The BBC has revealed that three government departments have opposed a policy for curbing greenhouse gas emissions (LINK).  The three Departments are Transport, the Treasury and Business, Innovation and Skills. The Guardian has also revealed that Lib Dem Business Secretary Vince Cable has ‘refused to support new carbon reduction targets recommended by the Committee on Climate Change’ (LINK) cashing with the Lib Dem Secretary of State for Energy and Climate Change Chris Huhne.

Meanwhile the Government has imposed the Carbon Tax to local council’s shedding their responsibility for dealing with pollution to local authorities, when climate change is clearly a problem that needs tackling on a national and international scale also.

As a result, Brent Council has had to pay nearly half a million pounds towards the Carbon Tax at the same time as having our budget reduced by £105 million. The Carbon Tax was highlighted as a service area cost pressure in Brent’s budget (LINK), largely because it was an unexpected cost that was bunged on to Councils. 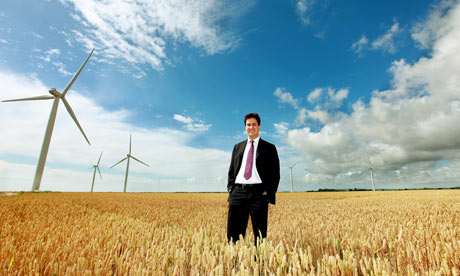 Tonight is the vote where a whole generation will learn the fate of their future. Whether they will be consigned with levels of unamiginable debt.

Despite daily protests outside her Willesden Green office, we are yet to hear a word from our Brent Central MP on how she will vote tonight. The Coalition Government Minister was one of those who signed the NUS pledge (not to be confused with a promise of course) that she would personally vote against any rise in tuition fees.

She has remained tight lipped even until today on the issue with the people of Brent having no idea what her thoughts are on the issue or how she will vote. Sky News tried to get an answer from her yesterday with no success (LINK).

All we’ve had so far is four word expletives (LINK).

I think this is a good thing as it means there is still hope. People in Brent will just have to wait in hope tonight to see if our local MP honours her pledge or if she sells out and condemns a generation of young people to a lifetime of debt.

There is no two ways about it. Lib Dem MPs have broken their promise on tuition fees. Every single MP including Brent Central’s very own Sarah Teather signed the NUS pledge, not as a potential ‘Lib Dem Government’ – but made individual commitments by themselves not to vote on any increase to the cap on University tuition fees.

“We are not putting child benefit into question. I never have and he (Vince Cable) hasn’t either” said Clegg, giving an unequivocal commitment to universalism and claiming that neither he nor Vince Cable had ever suggested anything else.

Now many face the prospect of losing their child benefit.

“The speed and the extent of deficit reduction should be decided on how the economy was performing not political sound bites and dogma. The time to start cutting the budget deficit and its speed must be decided by a series of objective tests which include the rate of recovery, the level of unemployment, the availability of credit to businesses and the government’s ability to borrow in international markets on good terms”

The Lib Dems have totally flipped their position on the economy. How can they be trusted? If god forbid they were ever elected as a Government on their own accord, we would not have a clue which policies they would implement.

The Lib Dems have backed proposals that will lead to a rise in tuition fees. The £3,290 cap on fees is proposed to be removed meaning that top Universities will be allowed to double charges, cutting off access to top Universities for young people from lower and middle income families. This could increase charges for most universities by nearly £4,000 a year.

During the election campaign, key Lib Dem figures held up pledges to vote down any proposed rise to tuition fees. A few ministerial cars later and they are actually actively proposing the complete opposite and looking to remove the cap on tuition fees, which will inevitably raise them to unprecedented levels.

Barely begun to pay back my student debt and it is worrisome for a young person in Britain today to think about how we will get out of the vicious circle of debt. I finished University three years ago with a student debt of nearly £15,000 and my current account in overdraft. Now that I am working, I think it is a manageable debt. But the magnitude of debt that the Lib Dems and Tories are going to impose on young people is disheartening. If fees go up for top Universities to over £7,000 a year, taking into account living costs, young people could leave University with debts of up to £50,000; more than what many parents paid for their mortgages! For families where more than one child aspires to go to University, this is a devastating blow.

The Lib Dems and the Tories say that we must move away from an economy built on the foundations of debt. If this is the approach they wish to have for our banking system, why are they consigning young people to a lifetime of debt?

What Sarah Teather has said:

Under [Labour] Government plans, students will soon have to pay £3000 a year to attend university. The Lib Dems predict that students leaving university could find themselves with debts of £20,000. The Liberal Democrats have launched a nationwide petition against these unjust fees. The Lib Dems call on the Government to scrap tuition fees and abandon their plans for top-up fees. Students should not be burdened with huge debts!

“Labour, backed by the Tories, are creating a university system where less well off people will be unable to attend. I believe this is completely wrong. I am proud that the Lib Dems are opposing ‘top up fees’ as well as fighting to abolish tuition fees.”

“Fear of debt is a major obstacle for students wanting to take up university places. A Barclays Bank survey has predicted that by 2010 students could face debts of up to £30,000. This is totally unacceptable. These plans are likely to mean that many of our brightest students in Brent would no longer be able to afford a university entrance fees.”

But for me, the worst thing about this is that the one group that will be ignored and not consulted on this is young people. People who were 16 or 17 at the time of the May 2010 election may be affected by the changes that the Lib Dems will enact on tuition fees. However, they did not vote for it because they were not allowed to.

I wonder if this solution would be pursued if young people had the right to vote. The solution is to lower the voting age to 16. Another principle the Lib Dems seem to have abandoned.